#ukgc16 – Maybe we need to go back to basics on social media too? 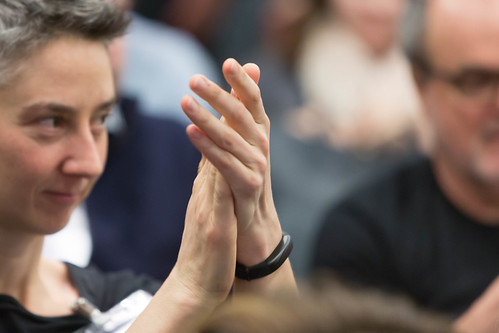 Ukgovcamp was back its old brilliance yesterday. Huge thanks to the organisers, there were some truly inspired touches that must have taken a lot of thought and work to prepare and get right.

I didn’t run a session, simply because I didn’t know how to say what I wanted to say. I am always talking about the same thing – social media. Except we didn’t talk about social media at all this time.

Except what that industry does is ‘Comms.’ And for a person who has online voice and uses it, ‘Comms’ is only a tiny part of what they do. A person can build a network of trust online, but building that network requires far more than Comms. There is the listening and the personality bit that Comms can’t do for you.

(Would you seriously have recommended to anyone to have a Comms specialist run their Twitter during yesterday’s event, for example? I’ve met people at other conferences who told me their PR people run their Twitter. Did I want to follow PR people who had no idea what was going on and who their client was meeting at this conference? Would I have found anything useful in the content the PR people in their little office came up with at the beginning of that month, that might be of interest to their followers some time in the future? I don’t think so.)

I am not trying to say that Comms and PR aren’t relevant any more, not at all. I’m trying to argue that Comms specialists shouldn’t own all conversations around social media. If we go back to old models of hierarchy and ‘we’re the experts at how to speak for this organisation, so the rest of you only speak through us’, we’ll miss out and social media will lose all of what made it special to begin with – the relationships. And if we don’t talk to each other any more, there won’t be an audience.

(Incidentally in Germany, where I’ve often tried to tell them that ‘marketing’ isn’t all social media should be doing, many of the orgs I’ve been trying to help have since looked at their numbers and stopped using Twitter. The way they used it, hierarchies, a lot of resources, broadcasting their highly professional, polished content – of course that wasn’t going to work. Could the guy at the tourist association do something similar to what I did running @I_amGermany the other week? Just talk about things happening to him in the place where everyone else wants to go on holiday? Make it personal and build his community just by posting on Instagram a few times a day? Sure. But his marketing agencies and Comms specialists won’t tell him that.)

Using social media through the filter of professional Comms seems safer than giving people their own voices. But only decision makers who don’t have any online life themselves would think so.

And on the other hand, imagine being asked to have your own online voice, and then being trained by Comms professionals on how to use the tools to do so. Being trained as a Comms professional means learning a lot of skills, of which the actual message is of the very least importance – you don’t need to concern yourself with it at all, it’s given to you and you have to adapt it to what you think your audience would react to, or you tailor it depending on which bit of the message this particular audience is entitled to. On the other hand, if you as a professional are given a platform, the message comes at the very beginning – after all you are told to speak online exactly because what you are saying can’t be said by Comms professionals, or they’d do it.

So I guess my conclusion is – Comms shouldn’t handle social media or social media training. Social isn’t Comms, it’s more. I’m not advocating anarchy, of course. We need good guidance. But just like the difference between prince 2 and agile, the guidance needs to come in the form of coaching and helping people bring out their own voices and use online tools to build their own networks. Rather than embedding Comms people in teams of developers, we should have a network of online voice coaches who are closely connected, have their own connections and leadership, and besides facilitating learning and growing into a new medium also share guidance on legal and other current matters.

Yes we should tell good stories and be engaging. Telling good stories doesn’t just happen without focusing some energies into it. Resources devoted to speaking online should be enabling, embracing individuality and trust and togetherness. Maturing social media should not mean sacrificing personality, empathy, trust and the real connections we’ve been able to build through this technology.